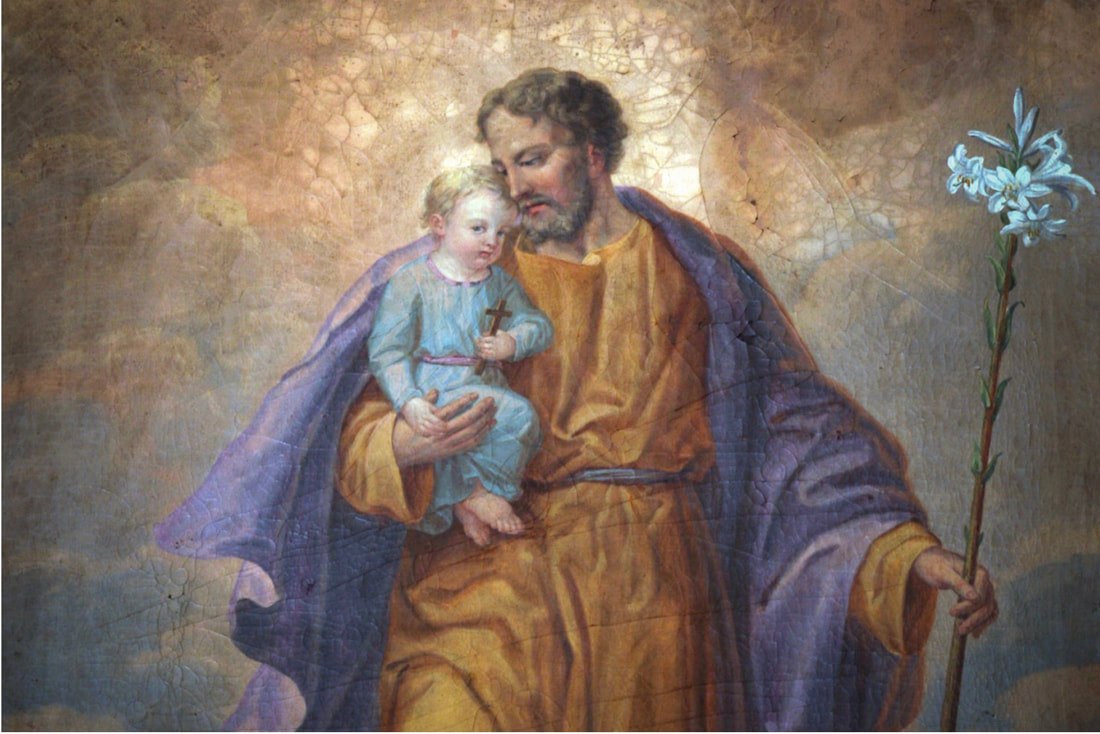 “Joseph was warned in a dream that Herod sought to kill the child. He fled with his family to Egypt.  In Egypt “parents and child remained until after Herod’s death.” (Mt 2:13; 19)

One hundred and fifty years after Pope Pius IX named St. Joseph as Patron of the Universal Church, on December 8, 1870, Pope Francis noted the anniversary on December 8, 2020, by dedicating an entire year to the saint. As Pius IX and the entire Church were undergoing great darkness in the world, all were entrusted to the providence of God in 1870 and St. Joseph.

Moving forward to the 21st century, we look at how the Church is again endangered with persecution, troubled by sin and evil, and under attack for her sovereignty and pro-life stance. And who do we turn to? We turn to St. Joseph, because he remains our patron in these dark times too. https://www.ncregister.com/news/pope-francis-proclaims-year-of-st-joseph.
2021, Diocese of Altoona-Johnstown Liturgy Committee, Liturgy Office, Mary, Mother of the Church Pastoral Center, 2713 W. Chestnut Avenue, Altoona, PA 16601.

April 4
Pope Pius IX Names Saint Joseph as Patron of the Universal Church
“When Joseph woke from sleep, he did as the angel of the Lord commanded him; he took his wife, but he knew her not until she had borne a son; and he called his name Jesus.” (Mt 1:20-25)
The earliest traces of public recognition of the sanctity of St. Joseph are to be found in the East. His feast, was kept by the Copts as early as the beginning of the fourth century. The feast of "Joseph the Carpenter" is entered, on 20 July, in one of the old Coptic Calendars of the eighth and ninth century. In the West the name of the foster-father of Our Lord (Nutritor Domini) appears in local martyrologies  of the ninth and tenth centuries.  (https://www.newadvent.org/cathen/08504a.htm)
In 1870 on the Solemnity of the Immaculate Conception, Pope Pius IX named St. Joseph as Patron of the Universal Church.  Pius IX recognized, along with the world bishops, that they had sought the intercession of St. Joseph often during a time of great persecution and turmoil in the Church in Italy and around the world. “Because of the sublime dignity which God conferred on His most faithful Servant, the Church has always most highly honored and lauded the Most Blessed Joseph next after his spouse, the Virgin Mother of God, and has implored his intercession in all her great necessities.”  In the same declaration, March 19th was designated as the double feast day of the Solemnity of Joseph, the Spouse of the Blessed Virgin Mary.  https://stjsa.org/pope-pius-ix-and-st-joseph.
2021, Diocese of Altoona-Johnstown Liturgy Committee, Liturgy Office, Mary, Mother of the Church Pastoral Center, 2713 W. Chestnut Avenue, Altoona, PA 16601.

March 28
DIOCESE OF ALTOONA-JOHNSTOWN RELIGIOUS COMMUNITIES
This is a snapshot of communities serving in the diocese under the patronage and in devotion to Saint Joseph.
Sisters of Saint Joseph: The first convent was established in Ebensburg, PA in 1869. A small group came to the U.S. through St. Louis in 1836.  The order began with six French women who formed a community without cloister or habit and devoted themselves to the needs of the ordinary people. Joined by a Jesuit priest in 1650, (Fr. Jean-Pierre Medaille S.J., in LePuy France), the Sisters of St. Joseph were among the first Catholic communities to be founded for the ordinary woman.  Placed under the protection of St. Joseph, by His Excellency, Henri de Maupas, in 1651, he named them to be the Congregation of the Sisters or the Daughters of Saint Joseph. Found in the Primitive Constitutions, “A Sister of Saint Joseph works in sincere charity-the manner of Saint Joseph whose name she bears…with an orientation towards excellence tempered by gentleness, peace and joy.”
Discalced Carmelite Nuns, Carmelite Monastery, Loretto: Mother Celine of the Eucharist, OCD, Prioress, shared, “Did you know that behind the walls of cloistered Carmelite monasteries around the world, St. Joseph is prayed to daily, loved, and honored in a special way? That is because our foundress, St. Teresa of Jesus (Avila), had a passionate devotion to him. She would affectionately call him the “glorious St. Joseph.” While she worked to bring about the Discalced (without shoes) reform with the Carmelite Order in 1562, St. Joseph appeared to her many times promising to bring about great blessings and success on the renewal Teresa was called to initiate.
Carmelite Community of the Word, Gallitzin: Sr. Marilyn Welch, CCW., “As daughters of Teresa of Avila, our spirituality follows her lead, recognizing St. Joseph as one who is always ready to guide and intercede on our behalf as he did for Mary and Jesus during his life on earth. “Teresa of Avila teaches us that wisdom and spiritual fruitfulness come from a spirituality rooted in total dedication to the Incarnate Word.” (CCW Constitutions #12)  2021, Diocese of Altoona-Johnstown Liturgy Committee, Liturgy Office, Mary, Mother of the Church Pastoral Center, 2713 W. Chestnut Avenue, Altoona, PA 16601.


Sunday, March 14
March 19, 2021 is the Solemnity of Saint Joseph, Spouse of the Blessed Virgin Mary.                                     According to the gospels, Joseph was a skilled craftsman and a descendant of King David. Joseph, learning of Mary’s pregnancy with a child that was not his, and under penalty of the law she would be put to death, deciding to quietly dissolve the marriage “as he was a righteous man. Told in his dreams by an angel of God that he was to take Mary as his wife and make her child as his own. “Joseph did as the angel commanded him, he took her as his wife.” (Matthew 1:19-25)
On this special day of the Church year many parishes will offer a banquet of blessings called the Saint Joseph Table.  If your parish does not celebrate this tradition, or is not celebrating this year, consider making an offering of food donation to your local food bank or parish collection. 2021, Diocese of Altoona-Johnstown Liturgy Committee, Liturgy Office, Mary, Mother of the Church Pastoral Center, 2713 W. Chestnut Avenue, Altoona, PA 16601.


Sunday, March 7, 2021
Pope Francis Prayer and Novena Prayer
Pope Francis’ deep devotion to Saint Joseph was highlighted when he chose his inaugural day to be on a March 19, the Solemnity (Feast) of Saint Joseph. Writing Patris Corde during the Covid-19 Pandemic, he was inspired that Saint Joseph, “has helped us see more clearly the importance of ‘ordinary’ people who though far from the limelight, exercise patience and offer hope every day. In this, they resemble Saint Joseph, the man who goes unnoticed, a daily, discreet and hidden presence,” who nonetheless played “an incomparable role in the history of salvation’.” (https://www.vatican news.va/en/pope/news/2020-12)
In the closing of Patris Corde, Pope Francis shared the prayer of trust he has prayed for over 40 years at the conclusion of Morning Prayer: “Hail, Guardian of the Redeemer, Spouse of the Blessed Virgin Mary. To you God entrusted his only Son; in you Mary placed her trust; with you Christ became man. Blessed Joseph, to us too, show yourself a father and guide us on the path of life. Obtain for us grace, mercy and courage, and defend us from every evil. Amen.”
Faithful believers pray the ancient Nine Day Novena Prayer to Saint Joseph during the Church Year all throughout the world. It is extremely powerful to begin the Nine Days leading up to March 19, the Feast of Saint Joseph. This year the 9 days would begin on Wednesday, March 10 and conclude on the Eve of the Feast Day. For the full Novena see: https://www.praymorenovenas.com  2021, Diocese of Altoona-Johnstown Liturgy Committee, Liturgy Office, Mary, Mother of the Church Pastoral Center, 2713 W. Chestnut Avenue, Altoona, PA 16601.


Sunday, February 28, 2021
Prayer and Plenary Indulgence options for the Year of Saint Joseph
The first way to get to know Saint Joseph is through reading and praying with the Gospels of Jesus Christ according to Saint Matthew and Saint Luke. We learn the history of Saint Joseph in an indirect way through the story of the life and teachings of Jesus of Nazareth. The actions and facts of Saint Joseph’s life are revealed through his relationships and roles as the foster father of Jesus and the spouse of Mary.
During this special year in the Catholic Church, the Faithful will have the opportunity to commit themselves “with prayer and good works, to obtain, with the help of St. Joseph, head of the Heavenly Family of Nazareth, comfort and relief from the serious human and social tribulations that besiege the contemporary world today.” They will be granted what is called a “Plenary Indulgence,” a time to repair the sinful relationship that we entered into because of personal sin, even though we have been forgiven. “It is in offering actions and prayers that allow for "a way to reduce the amount of punishment one has to undergo for sins." (#1471, Catechism of the Catholic Church).
There is a very lengthy list of options named by Pope Francis and the Vatican Committee on Indulgences in addition to the standard obligations. You will be able to see a growing list of pilgrimage opportunities offered by the Diocese of Altoona-Johnstown in addition to what may be happening in your parish. 2021, Diocese of Altoona-Johnstown Liturgy Committee, Liturgy Office, Mary, Mother of the Church Pastoral Center, 2713 W. Chestnut Avenue, Altoona, PA 16601


Sunday, February 21, 2021
Pope Francis proclaims Year of Saint Joseph
On December 8, 2020, the 150th Anniversary of the proclamation of Saint Joseph as Patron Saint of the Universal Church, Pope Francis issued the Apostolic Letter Patris Corde (With a Father’s Heart) as an extended reflection of the holy foster father of Jesus and spouse of Mary. Written in the backdrop of the Covid-19 Pandemic he shares, “Saint Joseph devoted himself as a father in varied ways:  beloved, tender and loving, obedient, accepting, creatively courageous, working, and “in the shadows.”
Because of Pope Francis’ deep devotion to Saint Joseph, he also announced on December 8 that the Church would be celebrating a Year of Saint Joseph, “which would take place for one year up to December 8, 2021. This is to be a special year with a special focus of the Church’s prayers and activities devoted to Saint Joseph. This year can also be a special year for those in need of Saint Joseph’s healing intercession in their relationship with their own father. It will be a year of discovery and growth for all. (Church Grants Plenary Indulgence for the Year of Saint Joseph, https://www.vatican news.va/en/pope/news/2020-12)
There will be prayer experiences, liturgies, special activities and local pilgrimage sites named throughout the eight counties in the Diocese of Altoona-Johnstown. There will be many opportunities to gain Plenary Indulgences during the year according to the norms of the Church. 2021, Diocese of Altoona-Johnstown Liturgy Committee, Liturgy Office, Mary, Mother of the Church Pastoral Center, 2713 W. Chestnut Avenue, Altoona, PA 16601.