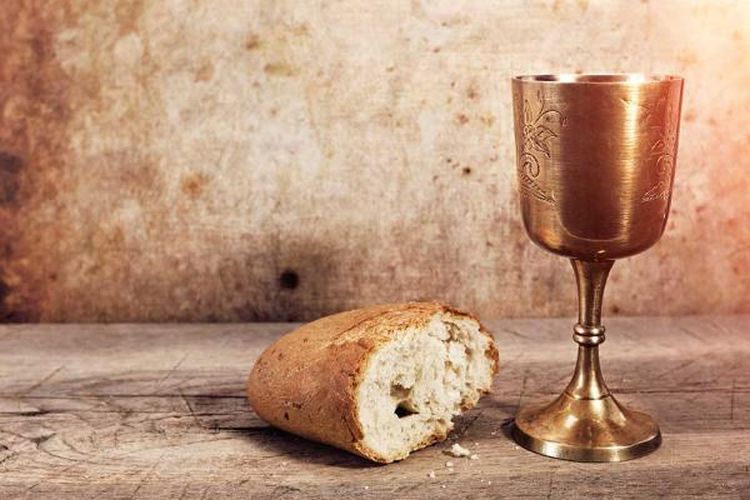 LITURGY AND MINISTRY
The Eucharistic Sacrifice of the Mass is the action of Christ and of God’s people in which the human race adores the Father, through Christ, in the Holy Spirit, and the faithful join themselves to Christ in giving thanks and praise to God.  The Mass is the Sacrament of unity in which the faithful are nourished from the table of God’s Word and of Christ’s Body.  This unity is expressed in common posture, in communal singing, reverential silence, and in sharing together the one bread and the one chalice.  The assumption of the Roman Missal is that every Sunday and feast day, the Liturgy will be celebrated with song, with a Cantor, preferably with two Readers, and with other assisting ministers.  It is also assumed that all communicants present at Mass – Priest Celebrant, Deacon, ministers and all in the assembly – will receive the Sacrament from bread and wine consecrated at that Mass, just as the Priest Celebrant must do.  The liturgical books, particularly those used by the Priest Celebrant, the Deacon and the assisting ministers, should be beautiful and appropriate rather than being disposable pages or booklets.

God’s people gather at the table of God’s Word at Mass.  When the Scriptures are proclaimed at the ambo, God Himself is speaking to his people, and Christ, present in his own Word, is proclaiming the Gospel.  The Gospel is the highpoint of the Liturgy of the Word.  The readings from the Old Testament tell us of God’s promises and the preparation of his people for the coming of his Son.  The New Testament readings are reflections of Saint Paul and other contemporaries of the Lord on the life and message of Christ.  In the Acts of the Apostles we have a history of the early Church.  All Scripture is inspired by the Holy Spirit.  The key word in the Liturgy of the Word is listening.  We are called to listen attentively as the Lector, Deacon or Priest proclaims God’s Word.  We should listen as we would if Christ Himself were standing at the ambo, for in fact, it is God who speaks when the Scriptures are proclaimed.

Perhaps the best way to understand the readings at Mass and our response to them is offered by Saint John Paul II in his Instruction Dies Domini.  He encourages those who take part in the Eucharist – Priest, ministers and faithful – to prepare for the Sunday Liturgy, reflecting upon the Word of God which will be proclaimed.  Saint John Paul II adds that, if we do not, it is difficult for the liturgical proclamation of the Word of God alone to produce the fruit we might expect.  In this way, we till the soil, preparing our souls to receive the seeds to be planted by the Word of God so that the seed may bear fruit.  The Word of God calls for our listening and our response in silent reflection, as well as in word and song.  Most important of all, the Word of God, which is living and active, calls each of us individually, and all of us together, for a response that moves beyond the Liturgy and leads us to engage fully in the task of making Christ known to the world by what we do and say.

The Priest gathers with the people of God at the table of Christ’s Body.  At the Last Supper, our Savior instituted the Eucharistic Sacrifice of his body and blood.  He did this in order to perpetuate the sacrifice of the cross throughout the centuries until He should come again.  It is in this way that He entrusted to his Bride, the Church, a memorial of his death and resurrection.  The celebration of the Mass also proclaims the sublime mystery of the Lord’s real presence under the Eucharistic elements.  Christ’s presence in the Eucharist challenges human understanding, logic and (ultimately) reason.  His presence cannot be known by the senses, but only through faith.  Christ is truly, really, substantially contained in the consecrated elements.  His presence is not momentary nor simply signified, but wholly and permanently real under each of the consecrated species of bread and wine.  The Priest offers the sacrifice in the person of Christ and presides over the assembly.

In addition, the nature of the ministerial priesthood puts into proper light the royal priesthood of believers.  Through the ministry of the Priest, the people’s spiritual sacrifice is brought to completeness in union with the sacrifice of Christ.  The prayers addressed by the Priest are said in the name of the entire holy people.  The faithful offer their prayers along with the Priest at Mass, and they offer themselves as well.  The celebration of the Eucharist is the action of the whole Church.  The Liturgy of the Eucharist, with the Eucharistic Prayer as the highpoint, calls us to respond in adoration, as well as in word and song.  At the Communion Rite, Catholic believers are invited to come forward, as they sing the Communion song, to receive the Sacrament of life.  All gather around the altar, not as spectators, but as active, conscious participants in the paschal mystery of Christ.  The Second Vatican Council tells us that participation in the Liturgy is the right and duty of all the baptized.  Nourished at the table    with Divine Food for the journey, all are sent forth from Mass to love and serve the Lord and one another.

The rubrics in the Roman Missal assume that the celebration of the Mass will take place in a church with a freestanding altar, an ambo for proclaiming God’s Word, and a presidential chair to be used by the Priest at certain points during the Liturgy.  The Most Blessed Sacrament should be reserved in a tabernacle in a part of the church that is truly noble, prominent, conspicuous, worthily decorated, and suitable for prayer.  It is preferable that the tabernacle be located either in the sanctuary, apart from the altar of celebration, or in a chapel suitable for the private adoration and prayer of the faithful and organically connected to the church and readily noticeable by the Christian faithful.  If the tabernacle is located next to the altar of sacrifice, the ministers genuflect to it only when they first approach the altar and when they leave the sanctuary, but not during the celebration of the Mass itself.  Ministers who are carrying items in procession should simply bow.

The first qualification for any participation in the celebration of the Eucharist is that the person has been baptized into the Body of Christ, the Church.  Each time the members of the Church gather to worship, they do so because their Baptism demands this of them.  While all share in the priesthood of Christ, which delegates them to worship, some members of the Church are called by God to serve in the ministerial priesthood as Bishops and Priests.  Bishops and Priests are privileged to act in the Liturgy in the very person of Christ, on behalf of the people, pronouncing the most sacred prayers of faith, presiding over the celebration of the sacred mysteries, explaining God’s Word, and feeding God’s people with the Body and Blood of Christ.  A Bishop has the added responsibility of being the chief shepherd, the principal liturgist of his diocese, and in that role is the successor to the Apostles.  Others, by God’s grace, are ordained to the Ministry of Deacon.  In the celebration of the Mass, Deacons proclaim the Gospel and assist the Bishop and Priest in exercising their sacred duties.

In addition to the ordained ministries, there are roles in the Liturgy which are exercised by lay people who place their time and talent at the service of the liturgical assembly.  They do this as Altar Servers, Readers (Lectors), Psalmists, Commentators, Extraordinary Ministers of Holy Communion, Cantors, Choir members, Instrumentalists, Ushers, and Ministers of Hospitality.  Others are stewards of their time and talent when planning and organizing the Liturgy, keeping the church and vestments, vessels and appointments clean and well-ordered, or providing decorations that reflect the spirit of the liturgical season.
The General Instruction of the Roman Missal makes clear that this variety of offices and roles is desirable and should be maintained.  All, whether ordained ministers or Christian faithful, by virtue of their function or office, should do all and only those parts that belong to them.  Each liturgical role should be fulfilled by one individual.  Ideally, no person should assume more than one liturgical ministry at Liturgy. There is a wide variety of services to be performed, and it is desirable that different individuals exercise those services so that the talents and gifts God has placed within the Christian community are fully utilized and these roles of service are not monopolized by a few.

Those engaged in liturgical roles need to be well-prepared for those roles and know how to carry them out with reverence, dignity and understanding.  Obtaining the proper preparation requires a further gift of time on the part of the person being prepared, as well as those in the parish responsible for the training of liturgical ministers.  The task of assigning individuals to particular Masses and organizing the distribution of roles is an indispensable duty in creating a well-ordered liturgical ministry within the parish.

The various liturgical ministries at Mass should reflect the face of the assembly gathered for worship.  There are those gathered at Liturgy who are part of the community but who cannot receive the Eucharist.  Members of the liturgical ministries can consist of believers fully united to the Catholic family and of believers who are divorced and remarried or not of the Catholic family.  It appears reasonable to invite these members of the assembly to take on those liturgical roles that are not directly related to reception of the Body and Blood of Christ at the altar.  The ministries of Usher and Greeter, Cantor and Choir would be open to those unable to receive the Eucharist.

All believers need to understand that part of their duty regarding Liturgy is to accept some responsibility for Mass and place themselves and their God-given talents at the service of the liturgical community whenever possible.  All who gather at Mass should be reminded that a believer cannot assume a passive role.  The Liturgy calls upon the duty and obligation of all believers to engage in full, active, and conscious participation throughout the entire liturgical celebration.  The Liturgy is about the action of God’s people, each with different offices and roles, from that of Bishop and Priest to that of Usher and Sacristan.  The minister at Liturgy is called to that service which mirrors Christ washing the feet of his disciples and instructing his followers to imitate his example.