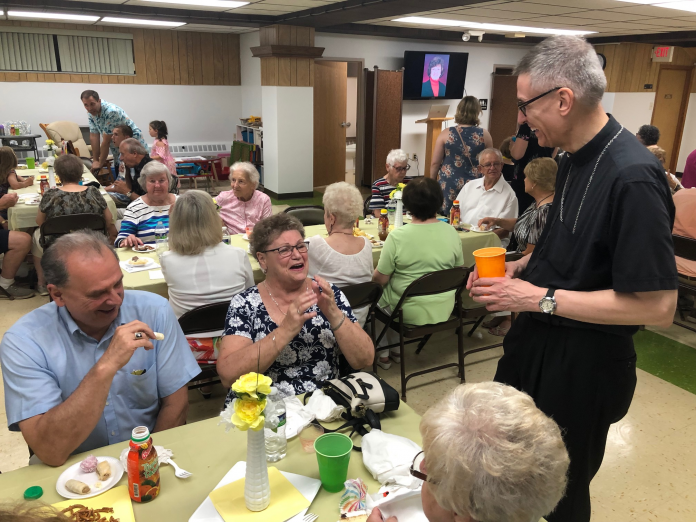 ​By Tony DeGol
Proclaim!
​
Not every family likes to admit it has ups and downs.

Refreshingly, the spiritual “dad” of the Resurrection Parish family in Johnstown put it all out on the table.
“Do we always get along? No; Do we get mad at each other? Yes; Do we say unkind things about each other? Never!,” proclaimed the pastor, Father George Gulash, amid roaring laughter. “But that’s what family does, so I want to personally thank you for allowing me into your family.”

That amazing family marked a milestone earlier this month as it celebrated Resurrection’s 10th anniversary as a parish.

Bishop Mark L. Bartchak presided at a Mass in honor of the occasion. Father Gulash concelebrated the Liturgy, along with the Very Reverend Alan Thomas, VG, the first Pastor of Resurrection, and Father Brian Warchola, who was assigned there as a seminarian.

A reception followed the Mass.

The faith community was created after the merger of the five parishes in the Cambria City section of Johnstown – Immaculate Conception, Saints Casimir and Emerich, Saint Columba, Saint Rochus, and Saint Stephen – in 2009.

Admittedly, blending each of the former parishes’ cherished ethnic traditions was a challenge in the early days after the merger.

All these years later, strong bonds have clearly formed.

“We are no longer five separate parishes,” assured Resurrection Pastoral Council President Michelle Rager. “While we embrace and celebrate our diversity, we are united as one. Let’s not look at where we were, but where we’ve come, and – more importantly – where we’ll be in the future.”

Christine Babik has been a Resurrection parishioner since the beginning.

“It’s wonderful to see people that you didn’t know that now are a part of your family,” she reflected. “It’s a wonderful thing to see how we’ve come together and increased our faith. I know it has increased my faith.”

Brande Conway began attending Mass at Resurrection right after the merger, and became an official parishioner six years ago.

“The people are just very welcoming and warm and loving and accept you for who you are,” she said.
One of the many highlights of the past decade has been the parish’s outreach to others. In fact, the faith community was recently honored with the Spirit of Community Award, presented by the Arbutus Park Retirement Community.

The parish also sponsors an annual mission trip to help the less fortunate in West Virginia.
As a young adult member of Resurrection, Brendan Veney sees his parish as vibrant and welcoming of new ideas.

“This Church is a community, and we come together and help the community outside of here, and that’s really important to me that the Church has a role in broader society,” he explained.

As Resurrection looks to the future, parishioner Bryan Hodos hopes the faithful will continue to build on the success of the past 10 years.

“The Cambria City area of Johnstown is really starting to blossom as an ethnic area, and I think we can be part of that, not just on our own, but with everyone,” he said.

Babick, the Director of Religious Education, is especially encouraged that future generations will be rooted in the parish.
​
“This is our home, and the neighborhood of Cambria City is our community,” she said. “I want to strive to build that foundation so they can say ‘this is my Church, and I am proud of my Church.’”